These are the official European Rankings post EQC2010. Please note that in error gareth Kingston is listed as English when he is in fact Welsh.

Posted by Chris Jones at 9:58 pm No comments:

For the first time ever we had a winner who was forming part of a Pair (Pat Gibson) that previously won the title while playing with a different partner (Dr. Ian Bayley, Tallinn 2005). Pat emerged triumphant this year, alongside partner Kevin Ashman, only after beating off the strongest of challenges from a Finnish duo of Jussi Savanto and Tero Kalliolevo.

Warm and heartfelt commiserations go to Tero who must rate as the unluckiest player of the weekend - finishing runner-up in both the Pairs (by 2 points) and Individuals (by just 1 point) and a Bronze medalist too in the Nations event. Hard luck Tero, that Gold medal will come soon, I'm sure of it! 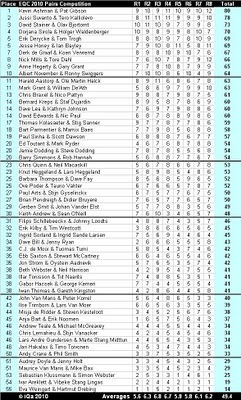 Third place went to last year's winners David Stainer and Olav Bjortomt. Doubtless they will make another strong challenge for the title when we all meet again in Bruges/Brugge next year.
Posted by Chris Jones at 1:46 pm No comments:

Milhous of Swindon, England regained the title they last won in Paris in 2006 (Broken Hearts had triumphed in Blackpool, 2007, Oslo, 2008, and Dordrecht, 2009). The field this year was tremendously strong, here's how they finished after 100 questions spread over 7 rounds. 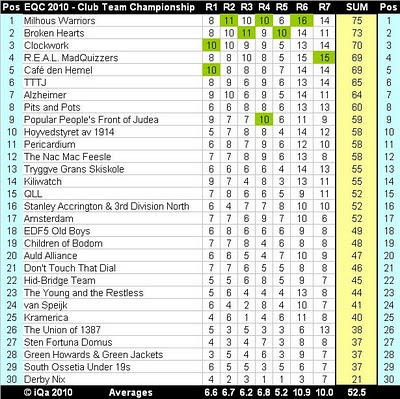 The 'Milhous' team comprised Kevin Ashman, Pat Gibson, Sean O'Neil and Tim Westcott. Reigning World and British Champion Pat Gibson took the place left vacant by the very sad demise of Mark Bytheway in July 2010. Mark had himself been World Champion (2007/08), and was reiging British Champion at the time of his death from cancer at the age of just 46. RIP Mark.
Posted by Chris Jones at 1:38 pm 1 comment:

The Individual Competition was held on Saturday 13th November. This began with a 100 question quiz, over 8 rounds. The top 10 players at the end of round 8 went into a finale, featuring 20 questions worth 2 points each.

This is how the players had stood after the first 100 questions….

For the purposes of the UK Order of Merit, ranking points will be awarded per the following table (with the exception that Olav and Pat exchange places, in light of developments in the finale)... 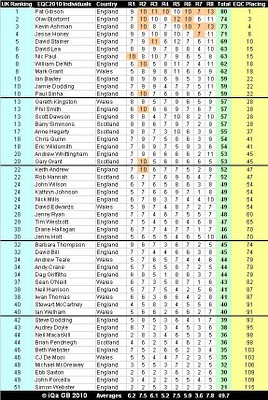 The weekend of the 12th-14th November saw quizzers from 15 countries gather at the Derby Conference Centre, Derby, England, for the 7th annual European Quizzing Championships.

The first event of the weekend was a qualifier quiz for the main European (Nations) Championships. A 'table quiz' of 100 questions was played to rank all competing teams in order to settle the draw for a knock-out tournament. In each of the Nations and Aspirational Cups 1st placed finishers would play 4th and 2nd place would play 3rd. Teams finishing 5th to 8th similarly played a KO tourney to formally decide overall 5th to 8th finishes.

Here are the scores after the Qualifier quiz: 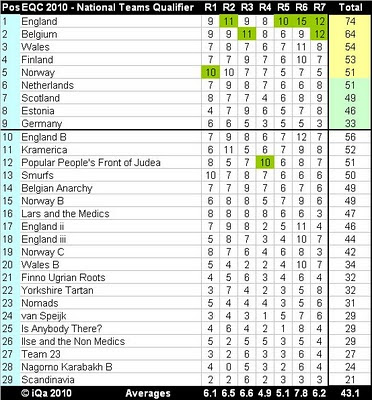 From among the national teams (rows 1-9 above the bold line in the graphic above), the top 4 played semi-finals - England defeated Finland and Belgium beat Wales. In the final England beat Belgium, thus retaining the trophy they won in Dordrecht, Holland last year, and Finland defeated Wales in the 'Bronze' match. The top 4 non-national sides (below the bold line in the graphic) played semi finals: England B and Kramerica both beating sides from Belgium to reach the final, where England B triumphed. 'Smurfs' won the 'Bronze' play-off.


Other countries represented at Derby who did not field a team of four were...