It would appear from the Norwegian Quiz Association website that Trine Aalborg, edging out Thomas Kolåsæter, has retained her individual title. Click on heading above for a link to the results on the official Norwegian site.

What follows is a slightly tweaked Google translation of the article linked to in the headline above:

"This weekend arranged NM quiz. It consists of three quiz competitions. The first is a Pairs Competition (Friday night, 25.9). The other is individual, and takes place Saturday morning. But the big highlight is the Team Championship. There will be set between 100 and 125 questions in each competition to some of the best quizere.

For the occasion, we have Christer Falck as quiz master in the studio of Good Morning Norway, who will ask some questions to some of the biggest quiz profiles - "I think it's fun music quiz. I think it can be fun with the film quiz, but geography quizzes and such, where I come up short" says Falck.

Ole Martin Halck is president of the Norwegian Quiz Association. He is by creating questions to a championship, but he will also help it from quizere that are not in competition. Falck recalls school days together with Ole Martin. "He is probably the smartest person that ever set their feet in Drøbak" says Falck.

Trine Aalborg is the reigning Norwegian champion of Quiz. She says that the broad interests needed to be a great quizzes. "It's no use saying that you do not bother to read about sports because they are not interested in it. Moreover, it is an advantage if things stick a little, "she said.

Lars Heggland is the reigning European champion in Quiz for siblings. "There are not many siblings who lined up in just the competition. In fact, there were only two, us included. But there is still a prestigious title to have!" says Heggland.

Here are the questions that were posed. (Answers below)

1: What two James Bond films, has recorded the most and least translated into today's currency?
2: What was the first, and the last nation, to win the World Cup on home soil?
3: What is the all-time second best-selling music albums and what is the world's best selling single?
4: Which country in the world is what limits to most citizens, that the total number of inhabitants in neighboring countries? And what is the capital?

[Note from Chris - Playing with Lasse Midttun, Trine Aalborg appears to have retained her Norwegiasn Pairs title on Friday 23.9]


Answers to those earlier five questions:
1. 'Thunderball' and 'Licence to Kill'
2. Uruguay and France
3. AC/DC 'Back in Black', and Elton John 'Candle in the wind'.
4. Burma, Naypyidaw
Posted by Chris Jones at 12:51 pm 1 comment:

Email ThisBlogThis!Share to TwitterShare to FacebookShare to Pinterest
Labels: Links to Norwegian TV

Every quizzer who attends a Quizzing.co.uk associated event earns ranking points according to their placing in the individual quiz. The bigger the field, and the greater its strength (calculated by reference to the UK Order of Merit rank), the more ranking points there are up for grabs.

After each event we are able to update two ranking tables...

The first of these is the Order of Merit table - showing players by rank and the points they have earned in the current season. Also indicated (at the foot of the graphic) is the 'promotion pace' target - being the number of points that would be required to achieve each rank (i.e. supposing the season ended now, rather than in early June 2011 when it is actually due to end). 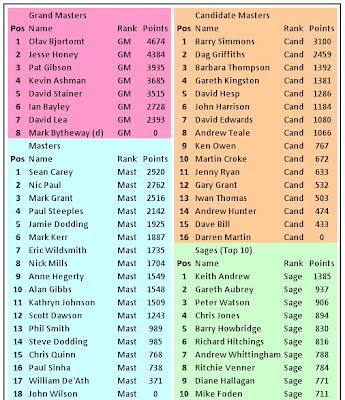 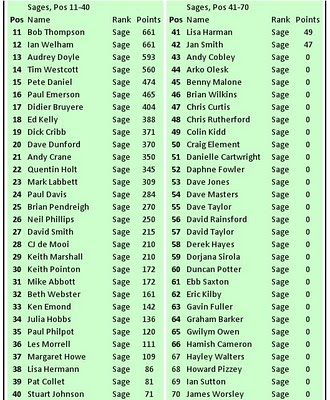 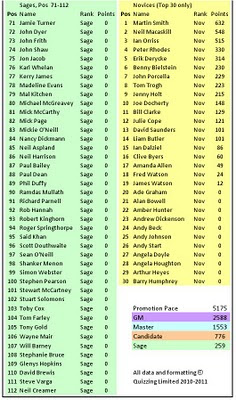 The second graphic shows the top 225 ranked players by points secured over the last 25 events. As time passes players totals erode unless they are doing well in current events.

Posted by Chris Jones at 3:33 pm No comments:

We offer our congratulations to David Edwards and Nic Paul, winners of the 2010 British Pairs Quizzing Championships. In our now traditional knock-out format they emerged triumphant from a field of 36 pairs to become the first pairing to regain the title. They did this thanks to top scoring in the final round, digging out 40% more correct answers than the highly fancied pairing of Kevin Ashman and Pat Gibson. Over the three knock-out rounds Ashman and Gibson outscored the eventual winners by two points, but could not maintain their momentum in the final round, garnering only the bronze medals behind the pairing of Jesse Honey and Sean Carey.

Click on the images to view full-size in your browser or right click and chose "open in new tab". 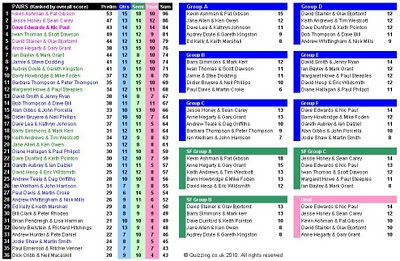 Posted by Chris Jones at 7:28 pm No comments:

Herewith details of the finishing positions in the three competietive individual contests run on Saturday 4th September 2010. More info on the Championships weekend and Order of Merit rankings etc. to follow:

Click on the images to view full-size in your browser or right click and chose "open in new tab". 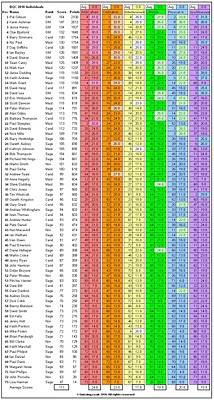 Posted by Chris Jones at 1:54 pm No comments: